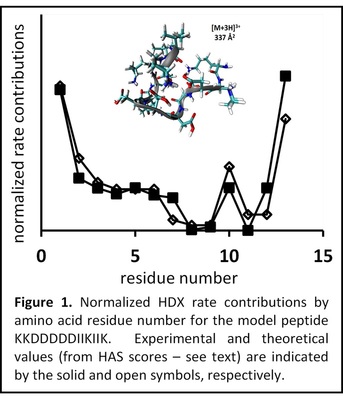 Over the last decade the determination of protein structures has proceeded at a remarkable pace with the total number of structures in the Protein Data Bank database approaching 100,000. Much of this progress has been achieved using traditional techniques such as nuclear magnetic resonance spectroscopy (NMR) and x-ray crystallography.  That said, structure elucidation can be elusive for certain molecules such as protein complexes or intrinsically disordered proteins as size constraints and conformational rigidity requirements restrict the utility of traditional characterization methods.  One emerging technique is Cryo-electron microscopy (Cryo-EM) where recent improvements in resolution have yielded valuable structural information even for large protein complexes; however, challenges remain with regard to resolution, throughput, and instrumental parameter optimization (e.g., electron energies).  One physical occurrence that challenges all of these methods is the presence of coexisting solution conformers.  An analytical method that provides structural information for comprising conformers within a population ensemble offers tremendous potential for deciphering mechanisms associated with protein folding and misfolding (including protein aggregation).

Our research group is developing analytical methods that combine ion mobility spectrometry (IMS) with gas-phase hydrogen-deuterium exchange (HDX) measurements and mass spectrometry (MS) analysis.  The work to data has resulted in a hydrogen accessibility scoring (HAS) model that can be used to confirm or reject nominal ion structures obtained from molecular dynamics simulations (MDS).  Figure 1 shows the ability of model to accurately capture the contributions of individual amino acid residues to the gas-phase HDX rates of a specific ion conformer.  More recently we have used the HAS model to show that IMS-HDX can be used to determine charge site locations on positively- and negatively-charged protein/peptide ions.  Additionally, the HAS model has revealed that negative ion analysis may be used in combination with collision-induced dissociation (CID).

A significant challenge to ‘omics studies is the time required to perform liquid chromatography-tandem mass spectrometry (LC-MS/MS) analyses.  For structural proteomics, an example can be obtained from LC-MS/MS applications for solution-phase HDX experiments.  Often such experiments require specific equipment that allow the performance of the LC step under cold conditions in order to mitigate the effects of solution back exchange.  In addition to the equipment expense, such analyses require significant amounts of time because of the condensed-phase separation step.  For comparative ‘omics analyses such as those encountered in “shotgun” proteomics experiments, the time required for the condensed-phase separation is also problematic.  Additionally, the LC separation step (relative to gas-phase separations) presents challenges with regard to separation reproducibility and component sampling.

Our research group has presented proof-of-principle studies showing the utility of rapid, highly-reproducible IMS separations.  A goal is to supplant condensed-phase separations for many ‘omics studies.  We have shown that the high-reproducibility of the IMS separation can be used to locate sites of post-translational modification (PTM) in shotgun proteomics experiments.  Additionally, such separations can be used for comparative ‘omics analyses without the need for spectral alignment.  For structural proteomics analyses, we have recently shown that the IMS separation can be used for determination of solution protection sites from HDX experiments as shown in Figure 2.  Indeed, the rapid, gas-phase approach provides nearly the same protection information obtained from LC-MS/MS experiments for the small protein ubiquitin.  Similar to these studies, we will continue demonstrate the enhanced capabilities of IMS-MS measurements for ‘omics analyses.

One challenge in the application of mobility-based separation techniques in ‘omics analyses is the relatively low resolution of the gas-phase separation step.  Indeed higher resolution measurements would be advantageous for both structural proteomics and comparative ‘omics analyses.  For example, we have recently examined the multimer structures of the N-terminal peptide (first 17 residues) of the Huntingtin protein.  Upon electrospray of this peptide (Nt17 peptide) the formation of multimers (dimers to heptamers) is observed.  We are interested in the structures of some of these earliest multimers as a toxic oligomer may be responsible for the onset and progression of Huntington’s Disease (HD).  Our studies suggest the possibility of a role of a stacked helix configuration arranged antiparallel in the formation of early-stage oligomers.  However, many other structures are also evident for many of the oligomers.  Many of these species overlap in drift time making it difficult to delineate the degree of solution heterogeneity.  Additionally, it is difficult to determine which structures are stable over the timescale of the experiments.

Our research group is investigating the use of the new, high-resolution technique termed overtone mobility spectrometry (OMS) for the thorough characterization of solution conformation heterogeneity as well as gas-phase structure establishment. Professor Valentine played in instrumental role in developing the theory of OMS separations resulting in an analytical expression that fully describes OMS distributions.  In particular we are interested in the possibility of using two-dimensional separation steps incorporating OMS in order to obtain high-resolution structural assessments as well as kinetics associated with structural transformations.  Ion trajectory simulations show that the latter approach is superior in resolving starting and ending structures obtained from conformation transformations in the gas phase.  It is noted that such a technique could be combined with gas-phase HDX to reveal more information about starting and ending conformations.   In addition to structural studies, the superior resolving power afforded by OMS-type separations will allow unprecedented comparative ‘omics investigations with respect to overall sample throughput.

Source Code
Over the years our research group has developed source code to perform a number of tasks.  The code is not ready for release of executable files; however, should you desire access to any of the code described below, please contact Stephen Valentine at stephen.valentine@mail.wvu.edu

1) TOF Design Software.  C++ software was developed that allows the optimization of TOF mass analyzer design.  Briefly, the software allows for randomization of TOF source and reflectron distances and voltages. For each setting the resolving power is computed for a population of ions having user-defined energy and spatial distributions.  Resolution is calculated iteratively for different settings to provide a pseudo-monte carlo approach.  High resolution conditions were used for the TOF geometry in this project.

2) Ion Trajectory Simulation software.  C++ software was developed to allow the computation of ion trajectory simulations.  The software is unique in that it can read in multiple electric field array files and switch among them during the trajectory calculations.  This has been helpful in designing the drift tube with multiple ion gates, ion activation, and ion funnel regions.

3) Peak picking software.  C++ software was developed to allow for rapid peak picking in two-dimensional ion mobility spectrometry (IMS) – mass spectrometry (MS) datasets.  The program is unique in that a random point is selected and tested to see if it is the center of a peak (in two dimensions).  If it is not, it is discarded and another point is selected and tested.  Once a peak center is found, the program integrates the peak in both dimensions based on user-defined boundary settings.

4) Hydrogen-deuterium exchange software.  C++ software was developed to allow the modeling of gas-phase hydrogen deuterium exchange using pseudo-first order kinetics.  Each exchangeable site is tested separately during the transit time of a population of hypothetical ions.  The exchange levels are represented as a histogram that can be compared with experimental isotopic distributions.  The code helps to select from among a number of candidate structures (computer generated) for small and large biomolecular ions.

5) Hydrogen site accessibility scoring software.  C++ software was developed to determine the relative contributions of individual hydrogens to the overall hydrogen-deuterium exchange rate for a candidate ion structure.  The current version considers only distances between exchange sites, charge sites, and incorporation sites as well as their overall surface accessibility.

6) Isotopic distribution fitting software. C++ software was developed to help determine the contributions of various conformer types within an ion population to the overall hydrogen-deuterium exchange pattern.  A pseudo Monte Carlo simulation is employed to determine the best fit to the observed exchange pattern.